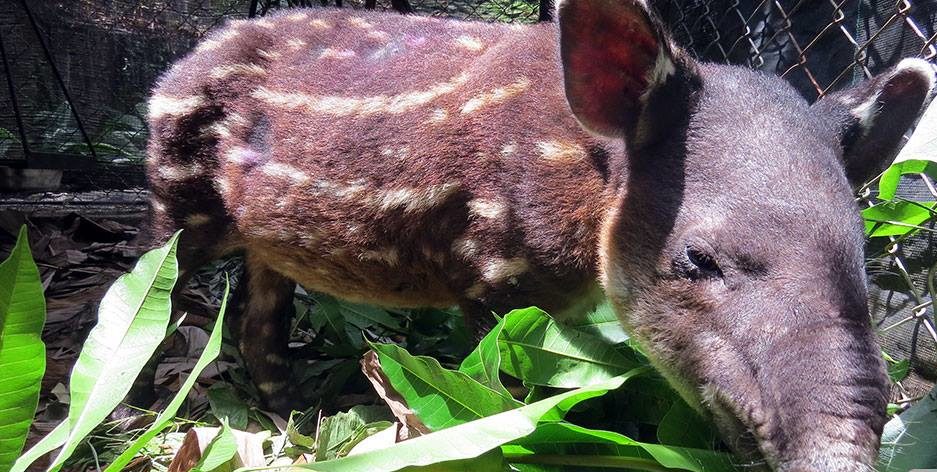 A tapir animal is a mammal that is primarily found in America. There are four tapir species, with the Lowland Tapir, Baird’s Tapir, and  Mountain Tapir being located in Central and South America. The fourth species of tapir is the Malayan Tapir is found in South-east Asia, giving this species the nicknames of ‘Asian tapir’ and ‘tapir indicus.’

The Lowland tapir – also known as the Brazilian tapir – is often found in the Amazon rainforest near a river basin. This tapir is often referred to as the ‘Amazon tapir’ as this is where it commonly resides, but it is also known as ‘Tapirus terrestris’ and can be found in Brazil and rainforests across South America.

Baird’s tapirs measure roughly two meters (6.6 ft) in length at adulthood and weigh anywhere from 150 to 400 kilograms (330 to 880 lb). One of the most outstanding features of this tapir is that this animal has a long, flexible proboscis (nose) that makes it look somewhat like a pig, but Baird’s Tapirs are actually more closely related to horses, donkeys, zebras, and rhinoceroses.

Tapirs are known to be quite aggressive, which may be related to the fact that tapirs have poor insight, so they often attack rather than retreat in the wild.

A tapir – also known as a Tapirus – often lives in the rainforests across South and Central America; however, they can prefer alternative habitats. Many tapirs are found in woodlands or grasslands, and they are often found in habitats that have a close water source nearby. They are often known as ‘rainforest tapirs’ as they are most commonly found in rainforests.

There are many tapir animal facts, with the main one being that tapirs are swift swimmers. They use this to their advantage when escaping from predators by running into the water. When swimming, they use their snouts as a snorkel when diving deeper into water.

A tapir diet often consists of fruit, berries, and leaves that are found in the wild. As tapirs are herbivores, they mainly survive by eating water plants and other types of vegetation, including leaves and twigs. They use their long snouts to search for food.

Baby tapirs are often born covered in black, yellow, and white stripes and spots to camouflage themselves from predators.  These spots are usually gone within five to six months as the baby tapirs become less vulnerable. Baby tapirs often stay with their mothers for up to eighteen months before venturing off by themselves. If a mother tapir is healthy,  she can reproduce every two years, giving birth to a single calf after a pregnancy of thirteen months. A Malayan tapir baby is found in Asia – where this species of tapir originates from – and are heavily reliant on their camouflaged coat to keep them safe in their jungle habitats.

There are only 3,000 Baird's tapirs left in Central America, so urgent action is needed to save this species.

You can do more to help

Baird's tapirs are endangered, so immediate action is needed. Donate to help non-releasable tapirs in our Lifetime Care Sanctuary and protect those in the wild.
Donate Now

Our tapirs in the Lifetime Sanctuary

There is currently one Biard’s tapir in the sanctuary, a very personable character by the name of Piki. Piki has a large natural habitat in the sanctuary where he can spend his day roaming and foraging the underbrush for tidbits to eat, much in the same way he would spend his time in the wild. Piki, the tapir, is offered a wide variety of natural treats that are scattered throughout his habitat to keep him busy.

Our environmental enrichment team also creates enrichment toys for him, such as bamboo logs filled with leaves and veggies and browse tied to tree limbs to encourage him to stretch and reach for his food the way a wild tapir would. They also create scratching posts for him made of broom bristles so he can scrub ticks and other insects off his body the way a tapir would in the wild.

There are only 3,000 Baird’s tapirs left in Central America, so urgent action is needed to save this species.

What do we do to help the tapirs at the sanctuary?

At Rescate Wildlife Rescue Center, we rescue orphaned tapirs and return them back to the wild if possible. If the tapirs we rescue are not releasable, we provide the best possible care for them in our Lifetime Care Sanctuary (LINK). We also maintain two nature reserves where we provide a protected habitat for endangered Biard’s tapirs as well as a myriad of other wild Costa Rican animals.

What can you do to help?