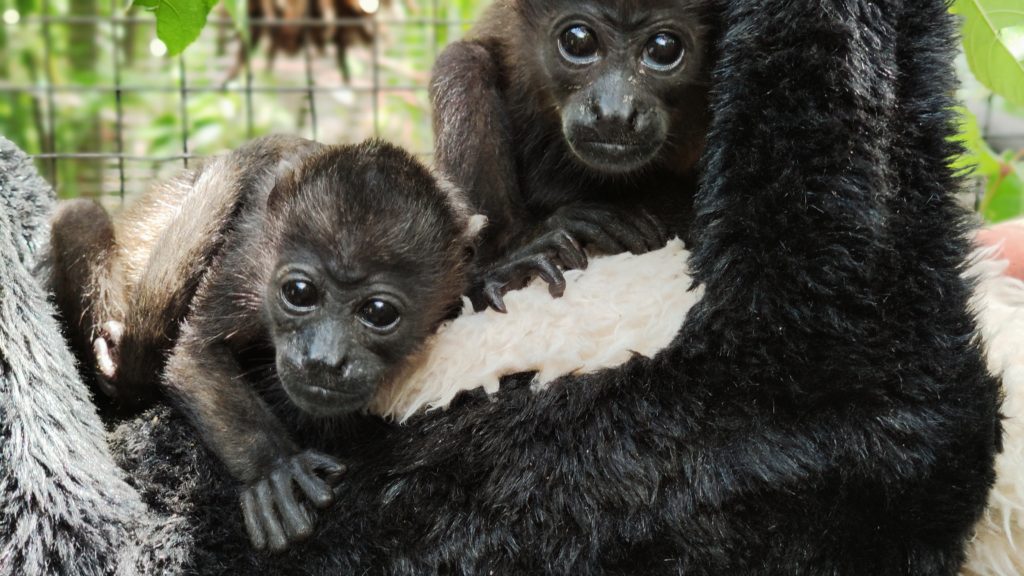 The howler monkey, famed for their loud calls, is one of the largest of the new world primates. Their bodies can reach sizes of up to 33 inches, with their tails measuring roughly the same size, and they can be spotted by their thick, long hair. Depending on the species, they can have a wide range of fur colors, such as the Guatemalan black howler monkey and red howler monkey.

What do howler monkeys eat?

The howler monkey’s diet is mostly omnivorous. It normally consists of fruits, nuts, plants, and leaves, but they can sometimes be found eating eggs or chickens if they are nearby a village. Howler monkeys can also see in trichromatic color, meaning that they can differentiate between different types of leaves to eat.

How does a howler monkey behave?

When pregnant, mothers carry their infants for 180 days and give birth twice a year. Black howler monkey babies are born blonde, but once the baby howler monkeys reach 2 and a half years old, the males turn black.

Black howler monkeys can be found in groups of 15 male and females, with a dominant male and female. The male is dominant over the group, while the dominant female assists in supporting the group. The red howler lives in troupes of only 1-3 males and around 7 females, as well as several younger howler monkeys and baby howler monkeys. When the howler reaches sexual maturity, they are forced out by their own troupe and must join another group.

Contrasting their loud, frightening howls, the howler monkey is not aggressive in nature and rarely fights with members of their own troupe. Howler monkeys spend 80% of their time resting in the trees.

Howler monkeys face the risk of becoming endangered from both human and natural sources. As a species, howler monkeys are most threatened by hunting, for food and for sport, and deforestation. Each howler troop needs several acres of forest to survive, and this is becoming very rare in their habitat. Many species of howler monkeys are becoming endangered, including; the Yucatán Black Howler Monkey (Alouatta pigra) and the Maranhão Red-handed Howler Monkey (Alouatta ululata). It is believed that some howler monkey these species may be extinct in the next 35 years.

The howler monkey’s howl can be heard from up to 3 miles in certain circumstances. They can create such an incredibly audible sound due to an enlarged hyoid bone found in their throat. Their hyoid bone basically acts as an enormous resonator. It allows the monkeys to communicate with other howler monkeys in their troop over long distances and also to tell other howler monkey troupes that this is their territory.

Where can howler monkeys be found?

The howler monkey’s habitat is the rainforests of Central and South America. They are most commonly found in countries such as Brazil, Ecuador, Columbia, and Costa Rica. They tend to live high in the forest canopy to be closer to their food and to hide from predators.

The species of howler monkey found in Costa Rica, is the mantled howler (Alouatta palliata), a species of howler monkey that takes its “mantled” name from the long guard hairs on its sides. Mantled howler monkeys can be found in the trees at many beaches on the Pacific and Atlantic coasts, including Guanacaste, Ocotal, and Hermosa. In Costa Rica, howler monkeys are threatened by power lines that they easily mistake for vines or tree branches, leading to electrocution. This threat is an issue for many primate and tree-dwelling species worldwide.

The howler monkeys at Rescate Wildlife Rescue Center,  need your help! We rescue dozens of baby howlers every year that are orphaned because their mothers have been accidentally electrocuted by coming in contact with live electric wires or they have been illegally stolen from the wild for the pet trade or tourist industry. We also rescue many adult howler monkeys that have been accidentally electrified, hit by cars or injured in some way.  All of these howler monkeys deserve a safe place to spend the rest of their lives!

You can help by making a donation, so we can continue to rescue and release howler monkeys into protected habitat at both of our release sites here in Costa Rica.