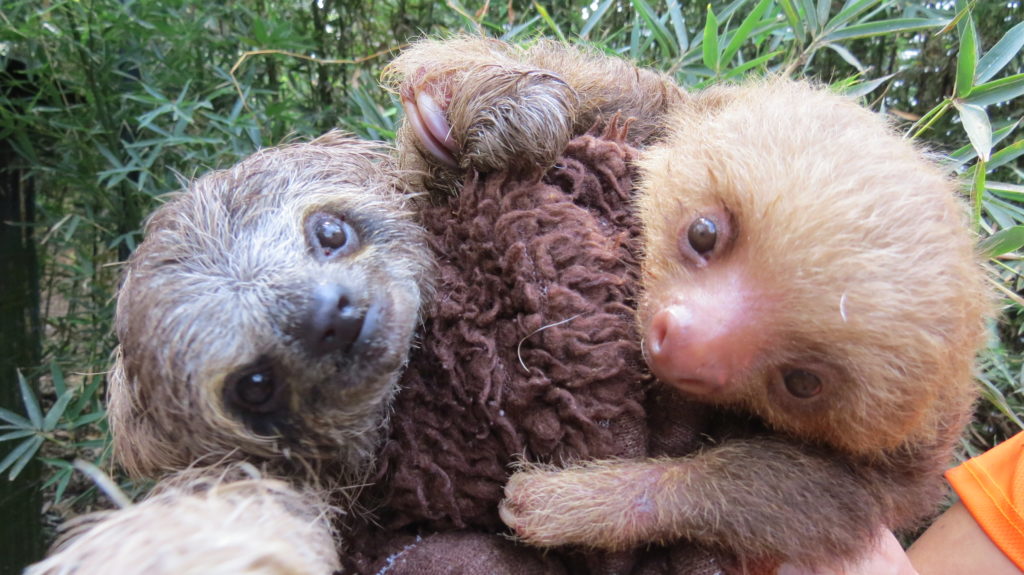 Sloths are slow-moving, solitary animals that spend their days hanging upside down from tree branches in the tropical rainforests of South and Central America. Also known as sloth bears, they use their long 3-4 inch claws to cling onto the branches of trees they live in.

There are six species of sloth that are categorized into  two groups: two-toed and three-toed sloths. Besides the obvious difference of one group having two toes and the other having three, the three-toed sloth has a small tail and longer forelegs. The two-toed has no tail and all their limbs are around the same size. However, the common names for sloths can be misleading as all sloths have three toes on the hind-limb. The true difference in digits lies in the forelimb, with sloths in the Choloepus genus having two fingers, while the Bradypus genus have three fingers.

The two-toed sloth belongs to the Megalonychidae family and, unlike the three toed-sloth, have much bigger eyes and a light, shaggy fur. The two-toed sloth is also aggressive in nature in comparison to the more relaxed three-toed sloth. The name ‘Two-Toed Sloth is misleading however, because all sloths have three toes on their hindlegs. The difference between the three and two-toed sloths is the number of digits on their forelimbs, so technically they are called Two-Fingered Sloths.

The three-toed sloth is also sometimes referred to as the three-fingered sloth, and can be spotted by the noticeable black marks around their eyes,  similar to the racoon. They are part of the Bradypodidae family and related to the Pygmy three-toed sloth, the most endangered species in the sloth world.

What were Giant Sloths?

Did you know, once upon a time, a giant prehistoric sloth roamed the earth? The giant ground sloth looked very different to the sloths we see today.This species spent their time walking on the ground and, from fossil research, grew to 9.8 feet. Living in the Ice Age, these sloth ancestors could be found near lakes and rivers and had a strictly herbivorous diet. Fossils of these prehistoric giant sloths have been found across North America, from Alaska to as far as Northwest Canada. Today, the two-toed sloth is the giant sloth’s closest living relative.

Where do sloths live?

Sloths tend to live in a number of home trees in their lifetime, around 20-30 years, but three-toed sloths can live in the same tree for their whole lives. They can easily camouflage themselves in the trees due to their dark fur color, protecting themselves from any predators.

Sloths rarely come down from their trees, mainly just  once a week to defecate. The two-toed sloth has an omnivorous diet of plants and animals. Their meals primarily consist of munching on small lizards, fruits and leaves. However, the three-toed sloth is strictly plant eaters, eating mostly leafs and buds from the trees around them, normally the leaves from cecropia trees.

What do sloths eat?

Due to their nocturnal nature, sloths will eat in the middle of the night. The two groups of sloth bear also have differences in their diet. Depending on their species, two-toed sloths can eat a variety of food, from plants and leaves around them to small lizards and insects, and they feed entirely alone.

Three-toed sloths on the other hand, feed on one type of leaf, the Cecropia, which luckily for an animal that moves at under 1km per hour, is found easily and readily available near most of their dwellings.

How do sloths behave?

As an adult, sloths live up to their name as a slow and lazy animal, only moving when it is necessary and sleeping up to 10 hours a day in the wild. Sloths in the wild grow algae on their fur, becoming home to a parasitic moth within their coat. These then produce caterpillars that feed on the sloth’s mouldy hair.

Sloths have such poor hearing that they could not hear a gun going off from a few centimeters away – and even if they could hear, their muscles are unable to move quickly and the most they can do is a small arm movement.

This year, International Sloth Day 2020 is on the 20th of October? Follow us on Facebook or Instagram accounts for the latest news and events and to keep up to date on what we’re doing down at the sanctuary to celebrate.

Where to see sloths:

Sloth bears live in the tropical rainforests of South and Central America, but deforestation of their habitat can put their food and shelter at risk. If the sloth needs to go down to the forest floor, they are in danger from large predators like jaguars or large birds of prey. This is why some of the six species of sloth bear are endangered today.

And deforestation isn’t the only impact humans have on sloths and their environments. Sloths in Costa Rica sometimes mistake power lines installed around trees for climbable branches, leading to electrocution and often leading to the amputation of their limbs. In these cases, they will normally find themselves in sloth sanctuaries in Costa Rica to receive the care they need.

Here at Rescate Wildlife Rescue Center, we receive many orphaned baby sloths who have been separated from their mothers. Sadly, baby sloths are often taken from their mothers by people who use them as props to attract tourists. Baby sloths also lose their mothers due to electrocution from coming in contact with power lines. It costs roughly $40 per month to feed one baby sloth. We also care for many sloths that have been electrified due to contact with power lines. Sadly, many times, the limb that came into contact with the power line must be amputated in order to save the life of the sloth. The good news is that sloths with only three limbs can still be released back into the wild. At Rescate Wildlife Rescue Center, we have released many three-limbed sloths back into the wild.

At Rescate Wildlife Rescue Center, we have many sloths that need your help! We rescue many sloths every year. They are often orphans who have been confiscated from people who are using them as tourist attractions and engaging in illegal activities such as allowing visitors or to hold them, feed them or take selfie photographs with them. We also rescue many sloths that have been electrified due to contact with power lines. It can cost over $500 to provide medical care for a sloth that has been electrified. The healing process takes a very long time and the medications and diagnostic tests can be very expensive. You can help to save an electrified sloth by donating, volunteering or visiting the Rescate Wildlife Rescue Center’s sloths, ocelots and a variety of other animals.