Many of us humans put time and effort into a life-long relationship, and view it as something special, even sacred. Mating for life has also been observed in a few of our fellow animal species, but the reasons for it might not be as romantic as we would like to believe, and it is certainly far from the norm!

Although some mammals show long-term mating habits, just 3-5% of 4000 mammal species are monogamous.

One of these species, believe it or not, is a giant rodent. Dwelling in the forests of Central and South America, the Agouti is an important seed disperser, but when it comes to mating, these amorous mammals are not ones for spreading their wild oats! Instead, they form stable pair-bonds that last until one of the pair dies. Males even shower their mate with urine during courtship, leading the female into a frenzied dance!  As in some human relationships, maybe their long-term bond is helped by plenty of personal space – they are often seen foraging alone!

Next up we have the fiercely loyal Coyotes. These wiley canids may have changed their habits to suit more urban habitats over the years, as they adapt to live alongside humans, but it seems their commitment, to just one mate, has not waivered. This is even with a high population density and plenty of food available. Raising their young successfully depends on the cooperation of both parents.

Another canid that mates for life is the Gray Fox. If their mate dies, it might take several years for them to find another. However, when the teenage foxes leave the den, the parents go their separate ways until the following season, so maybe distance really does make the heart grow stronger?

While a few percent of mammal species practice monogamy in their relationships, particularly canids, this figure is in stark comparison to an estimated 90% of birds!

Scarlet Macaws, the color of love, are known to mate for life. These highly intelligent and sociable birds can live up to 75 years in the wild, now that is commitment! Bonded pairs have up to two eggs every year, and spend hours preening each other and their chicks. What says unconditional love more than removing parasites from your partner’s feathers?

When it comes to Black Vultures, looks can certainly be deceiving! Often thought of as creepy, cold creatures, once you get to know them, they are anything but! Males circle females with their necks outstretched, then follow and dive towards them. The pair stay together all year and take turns incubating their eggs. Sharing responsibility is definitely something we can relate to in human relationships. Vultures are essential to our ecosystems, removing disease by eating dead animals. As well as them loving each other, we should love vultures more too!

Barn Owl pairs work as a team. While the female tends to the nest, the male, devoted to his family, brings home food to his partner and chicks. We might think of this in human terms as being quite an old-fashioned set-up! Barn Owls also have their own ‘language of love’ – males ‘flirt’ by screeching and bringing the females dead rodents, how romantic!? Interested females ‘flirt’ back by croaking!

With their large, knowing eyes, owls are often characterized as wise creatures. However, are they, and other animals that mate for life, wise to do so, or would they be better off seeking out different mates?

So, if infidelity is beneficial for a species, why do some animals choose the strategy of a more monogamous relationship?

One reason could be proximity. If animals live far apart, they might chose to ‘love the one they are with’ incase they cannot find another! A great example is the intestinal parasite Schistosoma mansoni. The likelihood of them finding another of their species in a human’s intestine is pretty slim, so they literally ‘tie the knot’ when they meet, wrap themselves around each other, and never let go!

Another reason for choosing a life of fidelity is to increase the number of mating cycles in one season, which increases the chances of breeding success over time. Seahorses have adopted this strategy, but because they only live up to four years, their ‘long-term’ commitment does not seem quite as impressive as the Macaws! Despite this shorter time, they definitely do not take each other for granted, partaking in daily dances that can last for hours! This helps to strengthen their bond, sync their reproductive cycles, and of course check that each other are still alive!

Flying back to the question of our wise owls, should they choose a life of monogamy, or change it up once in a while? In the case of owls, and other raptors, they have a long breeding season because their offspring need a long time to form in the eggs and more care and teaching after hatching. Starting with a known mate means breeding can start earlier, and give more time for offspring development before harsh weather sets in. A long-term bond also makes it easier to start again on a second brood if the first one fails due to weather or predation. Owls are particularly vulnerable to bad weather because they do not have oiled feathers, and therefore can only hunt in dry conditions. So, unless a partner dies or is no longer able to produce young, it makes sense for them to be monogamous.

Although infidelity can strengthen the genetic health of a population, this strategy might not always be the most suitable for a species. If environmental conditions have a big effect on breeding success for example, or offspring need more tender-loving care, a ‘marriage of convenience’ might be a better option. Monogamy, and putting more time and effort into one relationship, is just one strategy animals can use to increase the chances of their species’ survival into the future.

Help us share the love and save orphan wildlife this Valentine’s Day with with a donation to our GoFundMe campaign: https://www.gofundme.com/f/saverescate 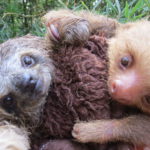